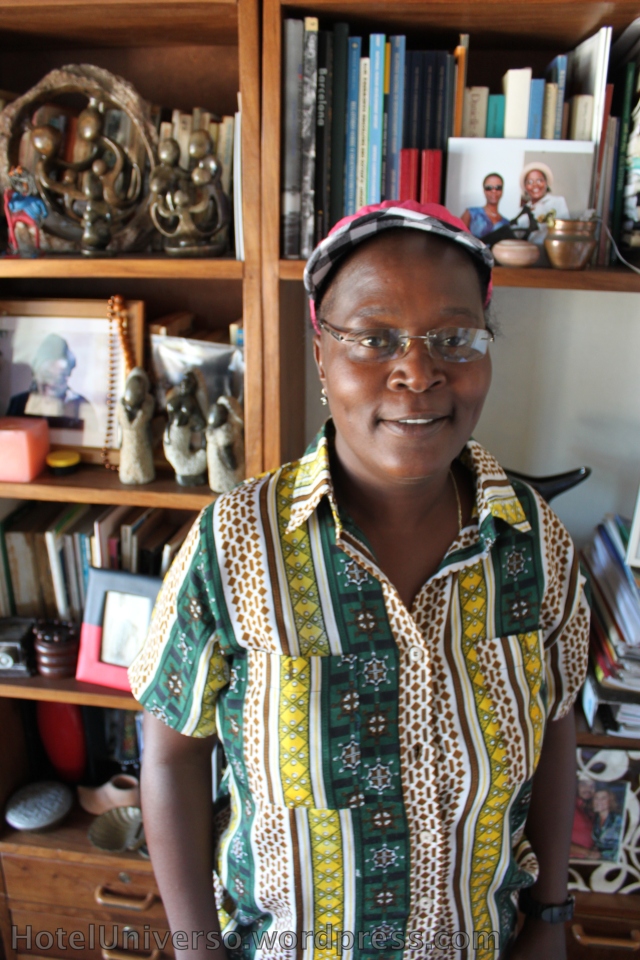 Ana Magaia at her Maputo apartment

A standard interview begins with the boring question: When were you born? Usually I get the simple answer, and we move on to more interesting things. Ana Magaia, the actress, answered the question with the date (December 27), the year (1958), and the exact time of day (3:05 in the morning). Ana’s late mother, she explained, frequently reminded her children the exact moment she gave birth to them. In the role of her mother, Ana then recited the hour and minute that each of her eight brothers and sisters came into the world.

When I met Ana, on the way to the state funeral for Malangatana, I didn’t know she was who she was, one of the country’s most recognizable faces. Her first star turn was in Mozambique’s first feature-length film, “O Tempo dos Leopardos,” in 1985. She played Ana, the guerilla freedom fighter who stalked the bush with an AK-47 on one shoulder and a baby (orphaned in a Portuguese attack) slung in a wrap across the other. She went on to major parts on TV and the stage, in Mozambique and in Portugal. When I eventually interviewed her, it wasn’t about her career, but rather about the houses she’s lived in—about growing up in Xipamanine.

Decades before Ana was born, Xipamanine had been home to colonial Maputo’s African elite. The elite never left, it’s just that Portuguese immigration to the city pushed Africans out of commerce and better-paying government jobs. Xipamanine (pronounced shee-pah-mah-NEE-neh) remained through the 1960s a hothouse for Mozambican nationalism and it was here that marrabenta flourished in dance halls and on verandas. Xipamanine still has one the highest concentrations in the city of zinc-paneled homes. To the pedestrian eye they may look like mere shacks, but they were once a mark of relative wealth and distinction in neighborhoods where most people could not build in anything but reeds. Ana lived in a house of reeds until she was about 13, when her father built the family’s three-room home of wood and zinc. Ana’s mother, an elegant woman who wore fancy dresses even as she swept the shanty clean, had long before designated Portuguese the official language of the household. Ana learned XiRonga—“our language”—from friends.

The Portuguese never quite figured out what to do with Xipamanine. Most African neighborhoods were officially outside city limits, but Xipamamine (which also had a large number of people of mixed race) was absorbed into Lourenço Marques early on—I think in the 1940s—and market facilities had already been built there. Nonetheless, city services were minimal. There was no running water or electricity. The children would line up at the lumberyard to buy wood scraps for fuel. Twice a week Ana’s older brothers would fill two barrels from the spigot at the nearby cantina. Ana’s family had a pit latrine, but most families used a cruder system that involved doing one’s business through a hole in the yard’s front wall. In the evening a city sanitation crew would come by, dump the contents of your waste bucket into a large wheeled container, and move on to the next house and the next waste bucket. Ana’s mother scheduled the family’s dinner early to avoid eating meals during the same hour the container rolled by.

During the last years of Portuguese rule, in the late 60s and early 70s, the city administration paved some roads in Xipamanine and installed street lamps—more likely for reasons of surveillance and security than anything else. Some prefabricated schools were put up. The Magaias got running water in 1972. Even still, many roads were dirt tracks, and they remain dirt tracks today. The parish priest, Padre Pedro, would insist on driving his car through the neighborhood, but he’d frequently get stuck, and he’d give sweets to the children who helped push his car out. Ana and her friends would pile sand in the roads, traps that guaranteed a steady supply of candy.

During these years, in the late afternoons, helicopters would make leaflet drops on Xipamanine. Ana and other children would scramble to collect them—anti-communist propaganda that read “FRELIMO will eat your children” or that showed a Chinese man with exaggerated features stomping on an African man’s neck. Portuguese officials apparently decided that a helicopter drop was the best way to communicate with people who lived in a neighborhood just two miles from city hall, as if Xipamanine were distant, impenetrable bush.

2 Responses to Helicopters over Xipamanine