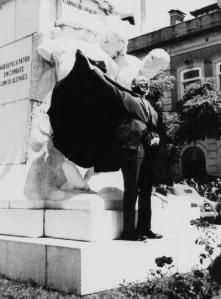 In 1958, Portuguese Air Force General Humberto Delgado was called “General Without Fear” because he had the audacity to seriously contest a presidential election that wasn’t supposed to be a contest. Losing to Salazar’s preferred candidate in an election widely considered to be rigged, he fled into exile in Brazil and plotted to topple the Lisbon regime. His sudden interest in democracy in the late ’50s, and his less heroic sobriquet “General Coca-Cola,” stemmed from his long posting to the embassy in Washington prior to his political career. Here’s his biographer (and nephew) Frederico Delgado Rosa on the General as he adjusted to Eisenhower’s America:

Very soon his daughters, like their mother, succumbed to the marvelous offerings of a consumer society, with treats without parallel in the old-fashioned groceries of Lisbon. Coca-Cola, bottled in a flash by the Washington Coca-Cola Bottling Works Inc., became an instant household habit, along with chocolate fudge, popcorn, toasted marshmallows, and sandwiches of peanut butter and strawberry jam, in a combination just perfect for ruining your figure.

Delgado was killed by Portuguese secret police in 1965 as he attempted to slip into Portugal from Spain.

This entry was posted in Portugal and tagged coca-cola, coups, humberto delgado. Bookmark the permalink.

2 Responses to More on General Coca-Cola